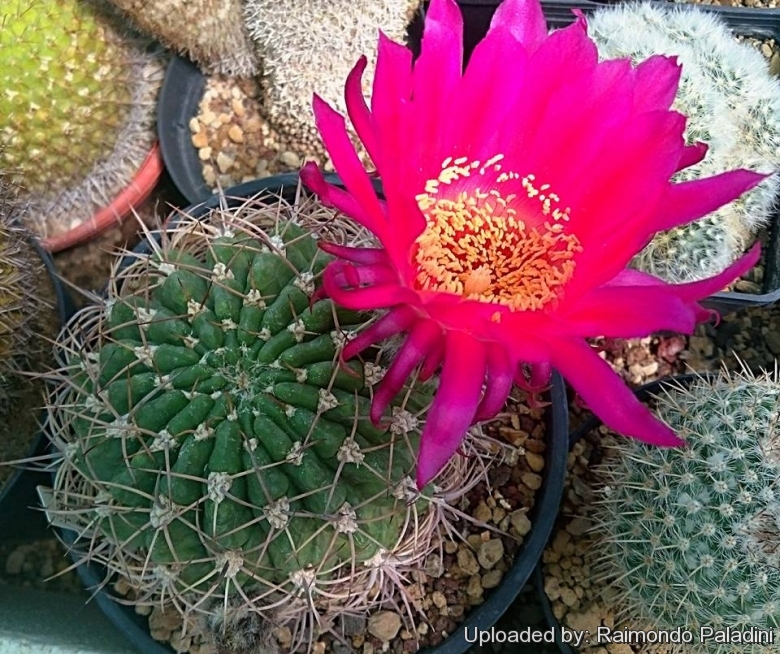 Description: Echinopsis formosa ssp. kieslingii (Rausch) M.Lowry (Lobivia kieslingii) is a barrel shaped cactus reaching 25 cm in diameter that produces splendid magenta and orange flowers, originating in a circle around the apical zone. Like Echinopsis formosa spp. rosarioana this is one of the species formerly known under Soehrensia that will flower at a modest size when only 10 cm in diameter. The body is almost concealed by dark red brown curved spines.
Derivation of specific name: This member of the Cactaceae family was given this name in honour of Roberto Kiesling - Argentinian expert and lower of cacti.
The following description of this species is based on Lobivia kieslingii Rausch 1977 sensu stricto (Collector's number referred here is WR 573).
Stem: Simple, spherical, light-green, to 25 cm across.
Ribs: up to 30, straight, vertical, divided in 20-25 mm long rounded tubercles.
Areoles. Oval, white felted, in the upper part of tubercle, up to 10 mm long.
Marginal spines: 7-13, spreading and curved toward the stem up to 25 mm long.
Central spines: 1-2, curved upward, up to 30 mm long. All spines are hard, stiffly pungent, red brown with darker tip.
Flowers: Formed laterally near the apex of the plant, broadly funnel-shaped to campanulate, up to 9 cm long and in diameter. Ovary (flattened-globose) and receptacle, green, with numerous fleshy scales, bearing dense tufts of hair in the axils. Hairs long white with black tips. Outer perianth segments narrowly-lanceolate, purple-pink. Inner perianth segments rounded, shortly-pointed, orange within with violet-pink margins. Throats short funnel-form, about 35 x 35 mm long and wide, greenish-yellow. Filamentis inserted in the two series, the outer yellow at the base and rose above, the inner ones green becoming pink above. Stile very short (20 mm long) green. Stigma lobes about 16, yellow, 7 mm long.
Fruit: Flattened-globose 35 mm long and 40 mm in diameter green, very succulent, melon tasting and dehiscing vertically only along a single, longitudinal split. Scales small, narrow with greyish-yellow to black hairs.
Similar species: Echinopsis formosa ssp. kieslingii is similar to Echinopsis bruchii (still known in cultivation as Lobivia bruchii or Soehrensia bruchii), but smaller in size, with spines always curved, and with flowers appearing laterally near the tip (almost apical in Echinopsis bruchii), the narrow-lanceolate perianth segment and the very short style are also distinctive of this species. 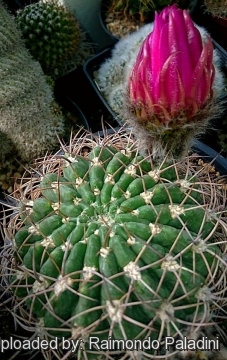 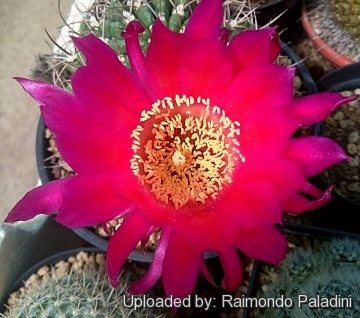 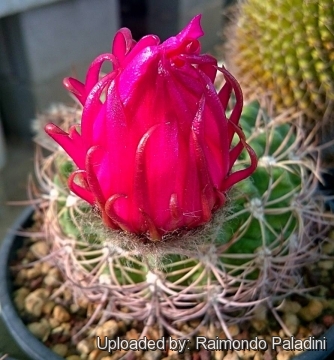 Cultivation and Propagation: Echinopsis formosa subs. kieslingii is one of the more cold hardy barrel cacti, that tolerates in winter both, ice, snow, hail, and rain and temperatures down to – 12° C.
Growth rate: It is a relatively rapidly growing species that will make clumps given the best conditions.
Soils: It likes very porous standard cactus mix soil. Prefer a low pH compost, avoid substrata rich in limestone; otherwise growth will stop altogether.
Repotting: This plant needs plenty of space for its roots, repotting should be done every other year or when the it has outgrown its pot. Use pot with good drainage.
Watering: Needs moderate to copious waterings in summer, but do not overwater (Rot prone), keep dry in winter at a minimum temperature of 0°C.
Fertilization: Feed with a high potassium fertilizer in summer.
Hardiness: Reputedly resistant to frost if kept on the dry side prior to, and during, cold weather (hardy to -12 C ° C, or less for short periods). Zone 8b to 10
Exposition: The plant tolerates extremely bright situations which encourages flowering and heavy spine production, but is likely to suffer from sun scorch or stunted growth if over exposed to direct sunlight during the hottest part of the day in summer. It may tolerate filtered sunlight or afternoon shade.
Uses: It is an excellent plant for container growing. It always looks good and stays small. It look fine in a cold greenhouse and frame or outdoor in a rockery.
Pests & diseases: It may be attractive to a variety of insects, but plants in good condition should be nearly pest-free, particularly if they are grown in a mineral potting-mix, with good exposure and ventilation. Nonetheless, there are several pests to watch for:
- Red spiders: Red spiders may be effectively rubbed up by watering the plants from above.
- Mealy bugs: Mealy bugs occasionally develop aerial into the new growth among the wool with disfiguring results, but the worst types develop underground on the roots and are invisible except by their effects.
- Scales: Scales are rarely a problem.
- Rot: This species is particularly easy and accommodating, seldom suffer of cryptogamic diseases. Rot it is only a minor problem with gymnocalyciums if the plants are watered and “aired” correctly. If they are not, fungicides won't help all that much.
Propagation: Division of larger clumps, direct sow after last frost. Seeds germinate in 7-14 days at 21-27° C in spring, remove gradually the glass cover as soon the plants will be well rooted (ca 1-2 weeks) and keep ventilated, no full sun for young plants! To make a cutting twist off a branch and permit it to dry out a couple of weeks, lay it on the soil and insert the stem end partially into the soil. Try to keep the cutting somewhat upright so that the roots are able to grow downward.