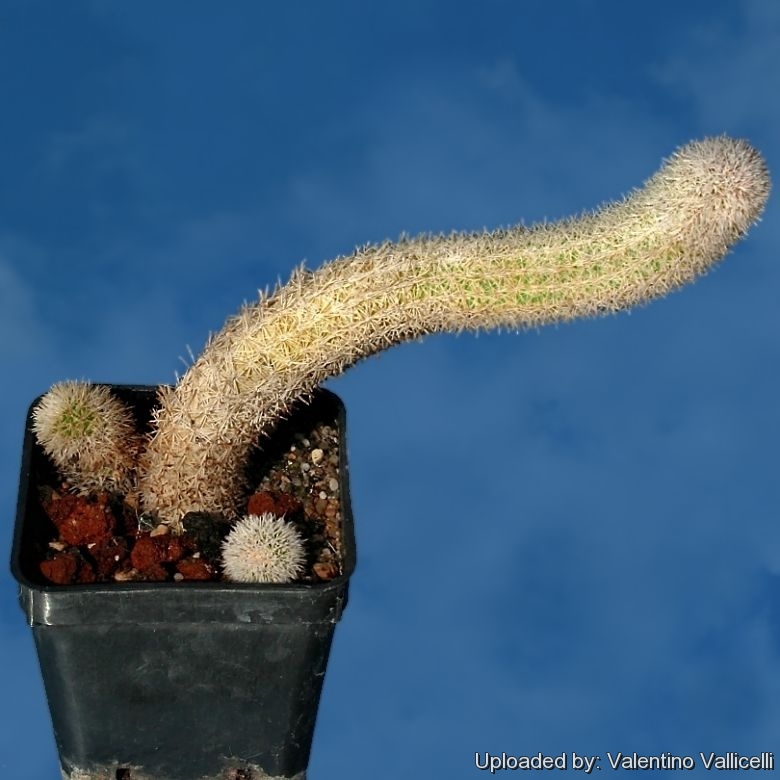 Origin and Habitat: North of Pativilca, boundary between Lima and Ancash, Peru (South America)
Habitat and ecology:
Habitat: Haageocereus lanugispinus grows in the hills near the coast (lomas de la costa.), but it has never been observed after Ritter discovery in 1957.

Description: Haageocereus lanugispinus is a very rare and poorly known cactus that produces finger sized, sprawling stems offsetting from the base. The peculiarity of this plant is the nice fine spination. It seems that there is only ONE clone propagated in collections worldwide!
Taxonomy note: According to the “The New Cactus Lexicon" Haageocereus lanugispinus is a synonym of Haageocereus tenuis. In effect the seeds of tenuis are very similar to those of lanugispinus, but in culture, there are a lot of differences, in particular the spination in tenuis is much less dense. Both are beautiful anyway.
Habit: It is a low growing cylindrical cactus species sprawling and spreading from its base and half-lying on the ground.
Stem: Cylindrical, 10-20 cm long, 1.2 2 cm in diameter, either upright or prostrate, eventually clumping near the base of the plant, green, somewhat hidden under a dense cover of glassy white spines.
Ribs: 13-14, 1.5-2 mm high.
Spines: 30-40, most unusual dense, short, unequal, needle-like, glassy white, 3-5 mm long, which detach very easily. As in Haageocereus tenuis the spines are minutely plumose.
Flower: White, 5 cm long.
Remarks: This plant seems to be very rarely seen in its "normal" form, as it is almost always seen the cristate form. However the crested form sometimes throws off normal stems, but they proved to be particularly difficult to root, for this reason the few plants found in specialized cactus collections are - usually – grafted.

Subspecies, varieties, forms and cultivars of plants belonging to the Haageocereus tenuis group

Notes: This plant, according to Fr. Ritter's description and pictures in his 4 volume book 'Kakteen in Südamerika', certainly Haageocereus lanugispinus. For a long time this taxon erroneously had been called Pygmaeocereus densiaculeatus due to Backeberg's generic misplacement in 1966.
Ritter found this taxon already in 1957 in a tiny area north of Pativilca in the flat coastal zone near or at the boarder line of Depto. Lima and Ancash. In his book he finally described it by the name which had been used before as nomen nudum in the nursery of his sister H. Winter.

Cultivation and Propagation: This mountain cactus necessitate deep pots and a well drained mineral potting mix.
Need a sufficient amount of air. They are susceptible to overwatering, but need enough water during vegetation.
Frost Tolerance: They tolerate light frost -5 °C and need to be kept in a cool place during winter rest this is important for the flowers as well as for their health. Without this cool winter period they normally wont get many buds.
Sun Exposure: This species needs a good amount of sun.
Propagation: Usually it is propagated by cuttings and grafting. Grafted plants in culture are most common and sprout strongly. But it is also feasible to root them but they grow much slower on their own roots and takes various years prior to they bloom.