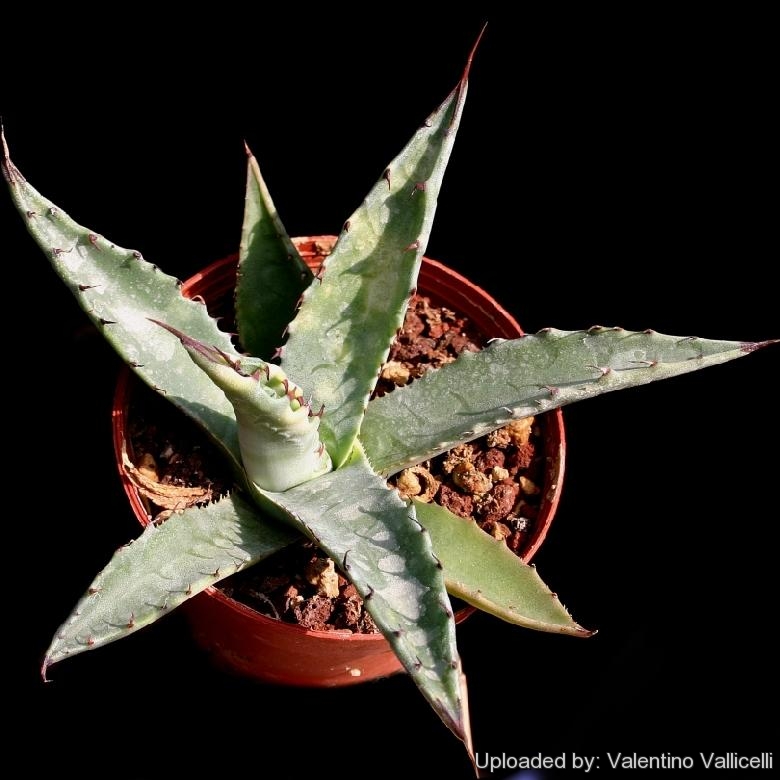 Origin and Habitat: Fairly widespread in Nuevo Leon, Coahuila and Tamaulipas in the Sierra Madre Mountains of northern and northeastern Mexico.
Type locality: Mountain above Carneros Pass, south of Saltillo, Coahuila, Mexico.
Altitude: 2300-3300 metres above sea level.
Habitat: It a mountaintop species that grows as an understorey plant in the pine oak forests . The larvae of the Gentry's Giant-Skipper butterfly (Agathymus gentryi) flies in small numbers around stands of Agave gentryi and Agave deserti in the hottest desert mountain range. The caterpillars bore and feed into these Agaves.

Description: Agave gentryi is a solitary medium-large sized agave fiercely spined along leaf margins and at the tip. It looks very similar to Agave montana and the boundaries of gentryi and montana cross over, both are very hardy and can easily grown outdoors in Great Britain.
Rosettes: Large dense bright glossy green and terminals.
Leaves: 45-85(-100) cm long and 17-26 cm wide glossy gray-green to dark apple green with noticeable bud imprints with teats and teeth along the leaf margin that curl inward resembling a jaw.
Remarks: It's 'toothier' version called 'Jaws' has exceptionally deep sinuses between the short red teeth, resembling a shark's mouth and is much more common in cultivation than the standard specie.

Cultivation and Propagation: This is one of the most cold tolerant of the large agave, tolerating temperatures down to 15° C (USDA Zones 6b-10 ) particularly when dry. It is a relative easy-to-grow species. Outdoors this agave will take cold wet conditions like just like Agave montana.
Growing rate: This is a relatively fast growing species that needs extra water in low desert regions.
Soil: It needs a very well-drained, soil.
Repotting: Use pot with good drainage.
Watering: Water regularly during the growing season from spring to autumn. During the winter months, one should only water enough to keep the leaves from shrivelling.
Exposure: They do well in full sun or a lightly shaded area. Plants cultivated outdoors are drought tolerant and takes blasting heat and full sun.
Feeding: During the beautiful season it’s good to enrich the soil using a fertilizer rich in potassium and phosphorous, but poor in nitrogen, because this chemical element doesn’t help the development of succulent plants, making them too soft and full of water.
Uses: They are great used as feature plants in modern style landscapes and tropical style gardens in Mediterranean and temperate zones. They are quite versatile. Because of their symmetrical form these plants are very attractive when grown in pots, containers, rockeries and embankments. Plants can be grouped together or planted among boulders in a rock or cactus garden.
Propagation: Seed as rarely offsets. Sow at any time of year in a well-aerated compost at a temperatures of 22-24°C . Stand the pots in water, moisten thoroughly and drain. Scatter and press lightly the seed onto the top of the compost. But do not cover the small seeds with compost. Secure a polythene bag around the pot or cover the container with glass or and place in a warm shaded place. If possible, germinate in a propagator. Some seedlings may appear within a week or 10 days others will take longer. At lower temperatures, germination usually takes considerably longer. Once germination has taken place, remove gradually the glass or plastic and move into a good light but not in direct sun. If the young plants are exposed to too much sun, or the compost dries out, they may stop growing and often turn red; once they stop, it is often difficult to persuade them to start growing again. Never let the pots dry out-but don't saturate them either. A sodden compost is as harmful as a dry one.