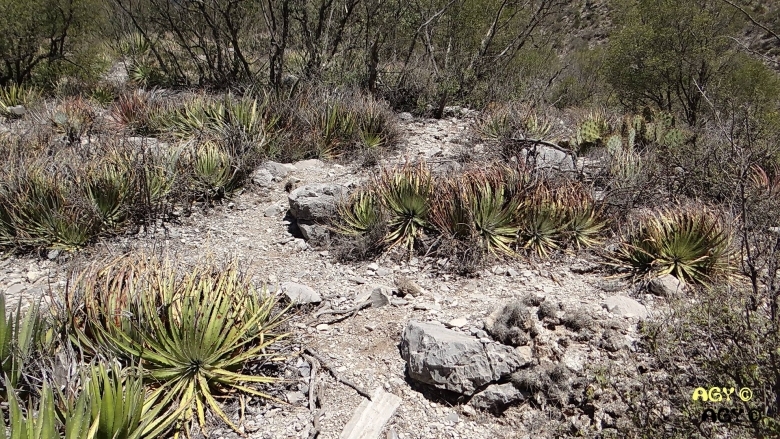 Agave lechuguilla Photo by: Agócs György
This species is locally very abundant and has one of the most extensive distribution of any member of the Agave genus.

Origin and Habitat: The lechuguilla (Agave lechuguilla) is distributed from south New Mexico to central Mexico, throughout the Chihuahuan Desert in Trans-Pecos Texas, southern New Mexico, and northern Mexico south to Hidalgo. It is locally very abundant and has one of the most extensive distribution of any member of the Agave genus, approximately 1600 km. Given it extraordinary abundance (dense stands of lechugulla may number up to 30,000 rosettes per hectare), it is believed that there are more lechuguilla rosettes in the wild than of all the other native agaves (more than 200 species ).
Altitude range: 500-1400 metres above sea level.
Habitat and Ecology: This species is restricted to desert habitats preferring gravelly to rocky calcareous places in desert scrub. The annual rainfall of the lechugulla area generally ranges between 300 and 500 mm, but there are local ecceptions. In the same area it is possible to find several endemic cactus species such as Mammilaria compressa, Ferocactus latispinus, Echinocactus ingens, Astrophytum senile and Leuchtenbergia principis. The plant flowers once in its life, then it dies. Blooming on average only after 20 years of growth (reports vary from 3 years to 35). The flowers are a source of nutrients for insects, bats, and some birds. This species is the dominant agave on the Chihuahuan Desert, where it is an indicator species for calcareous soils. Thick stands of lechuguilla , armed with their stiff, needle-sharp spines, can impede both human and animal movement It hybridizes with Agave havardiana, Agave neomexicana, Agave gracilipes, and Agave × glomeruliflora. In localities where A. lechugulla grows with Agave lophantha there are intermediate forms, which are assignable as hybrids. There are no major threats to this species at present, but it might be threatened by deer and javelinas (collared peccaries) who eat it, however, it is poisonous to cattle.

Cultivation and Propagation: Agave lechuguilla is seldom cultivated as an ornamental, but easy to grow and suited for any well drained soil in half or full sun. Suited for light shade to full sun, but better with some shade in summer. It needs a very well-drained soil and grows fairly fast in summer if provided with copious water, but allow to dry thoroughly before watering again (the more water and fertilizer this plant gets, the faster it will grow). During the winter months, one should only water enough to keep the leaves from shriveling.
It has been reported to be frost tolerant down to -12° C, but it is best to avoid freezing temperatures if not perfectly dry.
It does great in containers or in the ground. Plants cultivated outdoors are more drought tolerant and can take some heat and full sun.
Use and Trade: Agave lechuguilla is the principal source of “istle” or “ixtle,” a hard fiber used for rope and known by the trade name “Tampico fibre.” This species is also used in the fabrication of brushes and scrubbers. Native Americans have used fibers from the leaves to make ropes and mats. Nowadays, Tampico fiber is also being used in the industrial brush business. It is resistant to most chemicals, alkaline and acidic solutions, heat, etc. The water stored in the flowering stalks of this plant, rich in salts and minerals, is sold in Mexico as a sport drink.
Warning: Has sharp spines that deter some gardeners. The plant is also poisonous to cattle, goats, and sheep.
Propagation: It is usually propagated clonally from offsets, which often are found growing around the base of the plant. Remove the basal suckers in spring or summer and let the cuttings dry for a few days before inserting into compost.