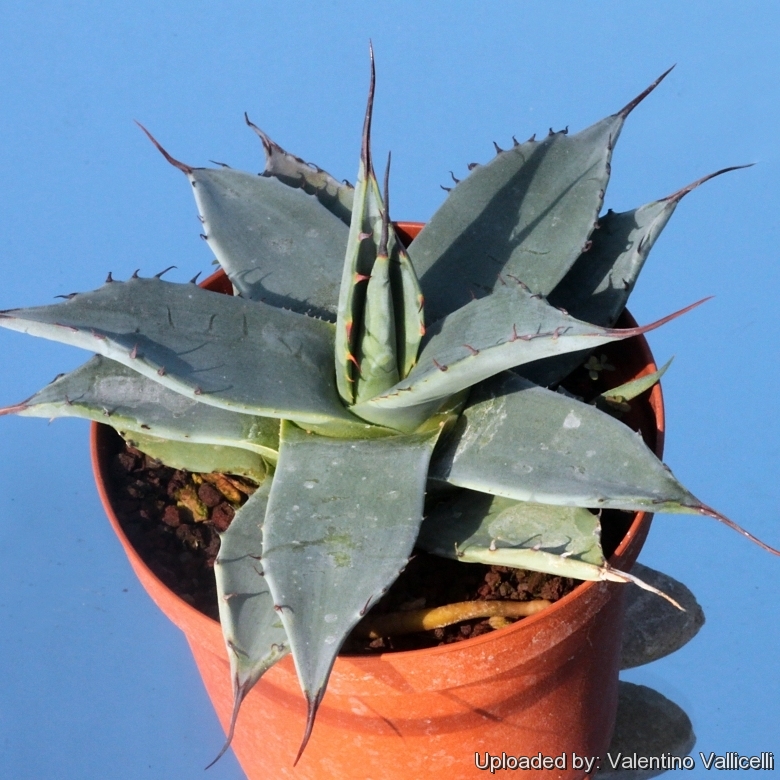 Agave applanata Photo by: Valentino Vallicelli
A plant from the lava bed near El Limon in highland above Jalapa, Veracruz, on about 2300 meter altitude. (MG1887.8)

Origin and Habitat: Mexico This taxon appears to be endemic to Veracruz and adjacent Puebla, but it was spread to the to North by men in pre-historic times. (Naturalized in Chihuahua, Durango, Zacateca, Guanajuato, Queretaro, Hidalgo, Mexico, Puebla, Veracruz, Oxaca)
Habitat: Sometimes in the Juniper-Pinion association.

Description: It is a medium sized species usually solitary or making few offsets of very stiff pale blue leaves with contrasting dark spines.
Rosettes: Very close, 0,5-1(-1,8) m tall, 1-2 m in diameter (but often more in cultivation)
Leaves: Numerous, rigid, erect, linear-lanceolate, sharp, usually widest at or near the base silvery glaucous-grey, 7-10(-18) cm. wide, up to 40-60(-100 or more) cm. long, mature leaves much longer than earlier stages. Margin serrated lined with prominent, horny, dark brow to black spines, throughout (or lacking in the middle) of the lamina, 8 -15 mm long about 4 - 6 cm apart, nearly straight or frequently curved downwards, very strong, sharp and painful to the touch. Terminal Spine very strong, ﬂat or broadly channelled about 3-7 cm long, dark reddish-brown becoming greyish with age, decurrent along the margin. The leaves bear the interesting impressed outlines of toothed leaves as they unfold from the plant’s central cone.
Inflorescence: Flower-stalk paniculate to the height of 5-6(-8) meters topped with clusters of up to three hundred bright yellow flowers.
Flowers: 55-80 mm long, ovary angularly cylindrical 5 - 38 mm, greenish, Tepals yellow, tube 15-22 mm long, lobes unequal, outer 15-22 mm. These are highly attractive to hummingbirds, a variety of insects, and even bats.
Booming season: It is a one-time spring bloomer. The plants are said to take from 15 to 25 years to arrive at blooming, and after once flowering the central plant dies reproducing itself by basal offsets, which will continue to grow.
Remarks: A. applanata is not readily separable from Agave parryii, which, in its young state at least, is not always distinguishable from the Agave palmeri.

Subspecies, varieties, forms and cultivars of plants belonging to the Agave applanata group 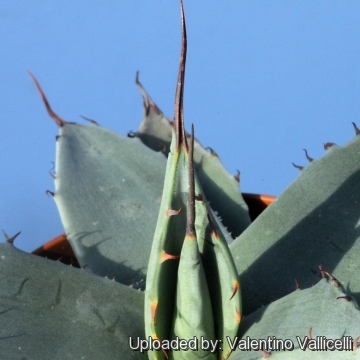 Agave applanata Photo by: Valentino Vallicelli
Send a photo of this plant.

Cultivation and Propagation: They are usually cultivated outdoors in rock gardens, in cactus and succulent gardens, in Mediterranean-style landscapes, in borders, or as a specimen. Need full sun and a very well-drained, slightly acidic, sandy or gravely soil. As an ornamental it is also grown in containers where it stays much smaller than its outdoor brethren. Agave applanatais theoretically hardy to -9° C, particularly when dry and it is best to avoid severe freezing temperatures. Keep it in a cool, frost-free area in winter and put it out on the balcony or patio in summer. It grows fairly fast in summer if provided with copious water but allows to dry thoroughly before watering again. During the winter months, one should only water enough to keep the leaves from shriveling. They do well in full sun or a lightly shaded area.
Warning: It can get very large, and it is armed with needle-sharp spines.
Propagation: Seeds or suckers which often are found growing around the base of the plant, Remove the basal suckers (if available) in spring or summer and let the cuttings dry for a few days before inserting in compost.
Uses: It was widely cultivated in pre-Columbian times by indigenous people who grew it around the home and along the old Indian trading trail between central Mexico and Casas Grandes, Chihuahua and elsewhere in the Mexican highlands.
Scenography: These striking plants are wonderful when used for accent or simply to provide some all year round foliage and often used in a pot as a patio plant, can be moved around to change the scenery or position to give more shelter
Fibres: The leaves also yield strong fibres which are suitable for making rope, matting, coarse cloth and are used for embroidery of leather in a technique known as piteado.