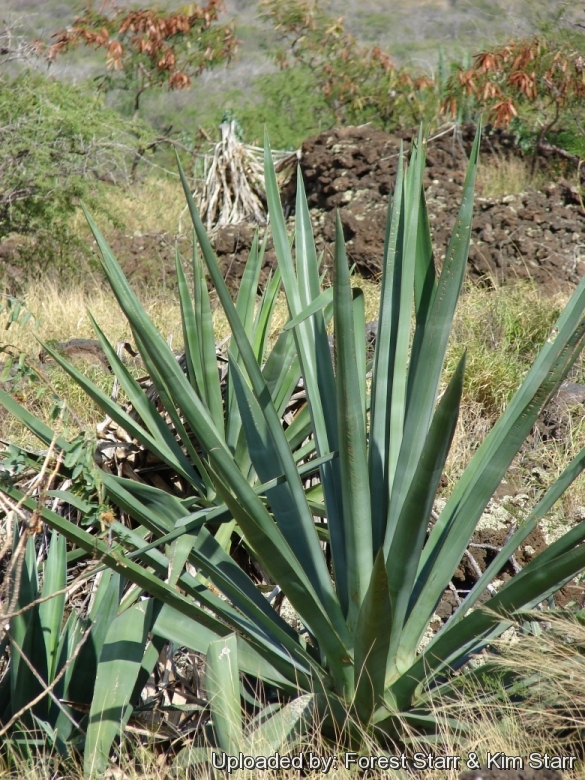 Origin and Habitat: Mexico. Agave sisalana appears to represent a sexually sterile clone that is widely cultivated in fibre plantations and could be of hybrid origin within the Agave vivipara-complex (as Agave angustifolia). The native origin of Agave sisalana is uncertain. Traditionally it was deemed to be a native of the Yucatán Peninsula, but there are no records of botanical collections from there. They were originally shipped from the Spanish colonial port of Sisal in Yucatán (thus the name). H.S. Gentry hypothesized a Chiapas origin, on the strength of traditional local usage. Evidence of an indigenous cottage industry there suggests it as the original habitat location, possibly as a cross of Agave angustifolia and Agave kewensis. At present it is grown mainly in Florida, the Caribbean islands, Brazil and Africa (notably Tanzania and Kenya) but it is escaped from cultivation and naturalized in other parts of Mexico, as well as in Spain, Libya, Morocco, the Canary Islands, Cape Verde, many parts of Africa, Madagascar, Réunion, Seychelles, China, the Ryukyu Islands, India, Pakistan, Nepal, Burma, Cambodia, Thailand, the Solomon Islands, Queensland, Polynesia, Micronesia, Fiji, Hawaii, Florida, Central America, Ecuador, and the West Indies.

Description: The Sisal, Agave sisalana, is a a monocarpic, perennial, short stemmed or stemless succulent herb with dark green leaves in rosettes and inflorescence in panicles. It is easily recognizable by its unarmed mature leaves ending with a short dark brown terminal spine. The term sisal may refer either to the plant's common name or the fibre, depending on the context. It is sometimes referred to as "sisal hemp", because for centuries hemp was a major source for fibre, and other fibre sources were named after it.
Stem: When the plant is not flowering, the stem is short and thick, 0.4 - 1 metres tall.When flowering, the stem or pole can reach a height of 9 m.
Roots: Sisal has a relatively small root system; roots are fibrous and originate from the base of the leaf scars at the bottom of the stem. Most of the roots are concentrated in the upper 40 cm of the soil, where they spread horizontally up to 5 m. A number of roots grow deeper than 40 cm, which results in good anchorage.
Rosette: 1.5 - 2 m in diameter, suckering with elongate rhizomes. Cultivated sisal plants may produce about 200-250 leaves per rosette before the emergence of the inflorescence. Leaves are arranged in an ascending spiral.
Leaves:* Ensiform (sword-shaped), fleshy, 90-130 cm long, 9-12 cm wide and 2-5 cm thick, At first, the leaves are glaucous with a bluish tinge, becoming green when maturing and somewhat slightly zoned in youth. Young leaves with few minute marginal teeth, mature leaves usually without marginal teeth. Terminal spine very sharp, subulate, shortly shallowly grooved above, 2-2.5(-3) cm long, dark brown, somewhat lustrous, not decurrent. The cross-section at the base of the leaf resembles a flattened triangle. Leaves are hard and contain bundles of fibres which are strong and long and run the length of the leaves. Each leaf contains an average of around 1000 fibres. The fibres account for only about 4% of the plant by weight. Leaves may live for 5 years and still be photosynthetically active.
Inflorescence: 5-6 m tall, `paniculate', ellipsoid, scape short, part-inflorescences 10-15(-25) in the upper half of the inflorescence, bulbilliferous after flowering.
Flowers: Perfect and tube-like, unpleasantly scented, consisting of six yellowish-green tepals 55-65 mm long and six stamens. Ovary shortly fusiform, 20-25 mm, nearly neckless. Tepals greenish-yellow, tube broadly urceolate, 15-18 mm, lobes equal, 17-18 mm. Flowering occurs from the bottom to the top of the inflorescence and may last for several months. The plant flowers only once, in commercial cultivation after 5 to 12 years, the number of years depending on cultivar and environment. After flowering the plant dies.
Fruits (capsules): Rarely developed.
Reproduction: A. sisalana usually reproduces by means of bulbils (small plantlets). Bulbils are borne in the axils of the bracteoles of the inflorescence after flowering. Moreover Sisal produces subterraneous rhizomes from buds in the axils of the lower leaves. Along the rhizomes there are buds that may grow into new plants, forming colonies.
Chromosome number: 2n = ± 138, 149, 150. 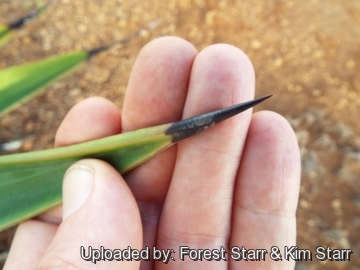 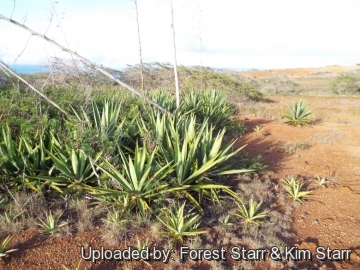 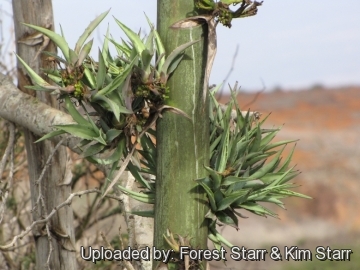 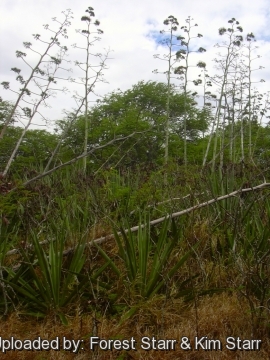 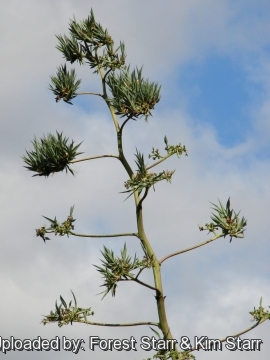 Small bulbils (plantlets) on the inflorescence at La Perouse, Maui. January 24, 2007. Photo by: Forest Starr & Kim Starr
Send a photo of this plant.

Cultivation and Propagation: Agave sisalana is considered a plant of the tropics and subtropics, since production benefits from temperatures above 25 degrees Celsius and sunshine.
Exposure: It needs full sun to partial shade or very high interior lighting.
Watering: Plants are not so drought tolerant and requires more water than most agave species. Plants should be watered and allowed to dry before watering again. During the winter months, only water enough to keep the leaves from shriveling. Ground cultivated plant are more tolerant to drought, and salty seaside conditions. Little if any irrigation is needed to maintain the plant once established.
Fertilization: Fertilize only once during the growing season with a balanced fertilizer.
Temperature: When grown as a houseplant, the temperature should never drop below 10° C. Not too frost tolerant.
Medical property: Antimicrobial, anti-inflammatory. Juice from leaves used as a wash for skin diseases and for treatment of local inflammatory conditions; sap mixed in liquid and drunk as strength medicine. A. sisalana is a source of hecogenin, used in the manufacturing of corticosteroids.
Toxic properties: The raw sap of the plant is corrosive and highly irritating to the eyes and skin. Calcium oxalate needles in the sap are thought to be the cause of irritation and swelling of the tissues of the mouth and throat when ingested. Skin contact with the sap from the cut leaves produces immediate burning, redness, itching and swelling, followed in several hours by blistering, which heals within 2 weeks. Irritation and temporary blindness result from sap getting into the eye. Infection and inflammation of puncture wounds caused by the sharp leaf tips near bone have resulted in a granuloma reaction resembling a neoplasm. The sharp spine at the tip of its toothed leaves is sometime removed to protect people and animals.
Uses: This plant is cultivated extensively in several parts of the tropics for the strong, coarse fibers in its leaves. The fibers of this Agave are called sisal, henequin or ixtle and are are mainly used for producing rope and twine. Because of the higher content of lignin in the fibre bundles, sisal fibres are more rigid, stiffer and have greater tenacity than other bast and leaf fibres. Next to rope production, sisal is locally also used to produce many different products such as brushes, nets, carpet pads, baskets, sacks, sandals, hammocks. clothing, paper pulp and construction material. In the Western world, much sisal was used as binding twine for grain-harvesting machines. However, at present it is partly replaced by synthetic fibre.
Propagation: A. sisalana is propagated by using suckers, which often are found growing around the base of the plant. Fortunately, many plantlets will form from the inflorescence, offering good opportunities for propagation.