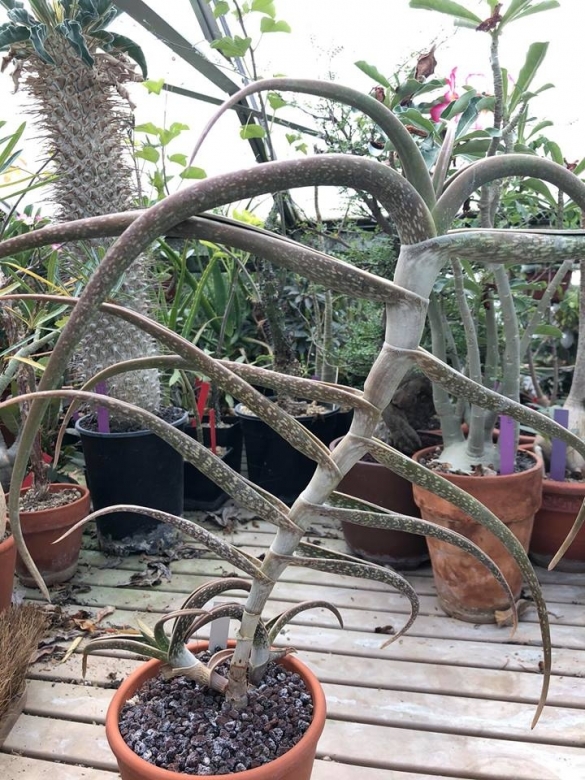 Origin and Habitat: Aloe inermis is distributed in Yemen (between Taizz and Dhala).
Habitat and ecology: This species grows on rocky slopes at around 700-900 metres above sea level.

Description: Aloe inermis is one of the very few aloes with spineless leaves. It is a suckering small shrubby species that forms mall to large clumps to 60 cm tall. It forms open rosettes of long narrow decurving pale olive green leaves on short stems that are smooth to the touch with a deep central channel and toothless margins. In autumn into winter appear a 60-90 cm tall branching inflorescence with salmon red or yellow flower.
Derivation of specific name: The specific epithet “inermis” is the Latin word meaning "unarmed" in referece to the toothless leaf margins.
Stem:: Short (less than 50 cm long), erect or on the ground.
Leaves: A loose rosette of 12-16 leaves, persistent for 20 cm, each 25-30(-45) cm long and 50-70 mm wide, fleshy, lanceolate or ensiform, long tapering, spreading, and becoming decurved, pale olive green or dull grey-green or reddish, pinkish at the base. Younger leaves with few or many dull white lenticular spots towards base. Tip recurved. The upper ones are flat to slightly channelled and the lower convex with a convex back. There is a slightly rounded, smooth, cartilaginous (horny) edge. Surface rough. Marginal teeth absent. The leaves on young plants are opposite at first, only becoming whorled (rosulate) as the plant matures.
Inflorescence: 70 cm high, oblique, with (4-)6-9 branches that are also sub-branched. Raceme loose, oblique, with flowers secund (to one side) on more oblique branches, up to 15 cm long, sub-dense. Bracts ovate-acute, 4 mm long, 2-3 mm broad, white. Pedicels 5 -10 mm long.
Flowers: About (25-)28-30 mm long, sub-cylindrical, base rounded, 7-8 mm in diameter, constricted above the ovary, then slightly enlarging to mouth, either salmon red or yellow. The buds are purple green at the tip and open with green stripped cream lobes free for 7 mm.
Chromosome number: 2n = 14
Similar species: A. inermis, like Aloe dhufarensis, grows in the drier parts of Dhofar and the two species often occur side by side. A. inermis has light green spreading leaves with recurved tips whereas A. dhufarensis has erect grey-green leaves. In flower the two species can be separated by the degree of fusion of the perianth lobes; in A. dhufarensis they are free in the top two thirds to three quarters whereas in A. inermis they are free in the top quarter only. It is also related to a similar African species Aloe kahinii and to the more common but stemless Aloe fleurentiniorum, also from Yemen. A natural hybrid with Aloe vacillans has been reported. 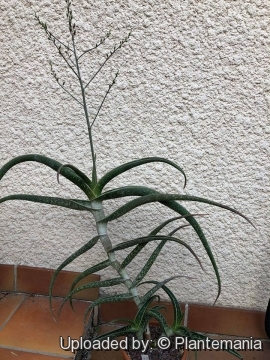 Aloe inermis Photo by: © Plantemania
Send a photo of this plant.

Cultivation and Propagation: In cultivation Aloe inermis prefers a good, well-drained soil with plenty of water in warm weather, minimum 5 degrees Celsius in winter with only a little water. It is quite drought tolerant and hardy.
Plant in full sun in a soil. This is an attractive and unusual aloe as a garden or pot specimen with no teeth or other sharp pointed appendages.
Traditional uses: This aloe has been an important dye source in Dhofar. Dead and dried leaves are scorched lightly over fire and pounded into a coarse powder. This is boiled in water until a strong blue-black colour is obtained. Cloth and fibres for basketry and mats are dyed with this pigment.