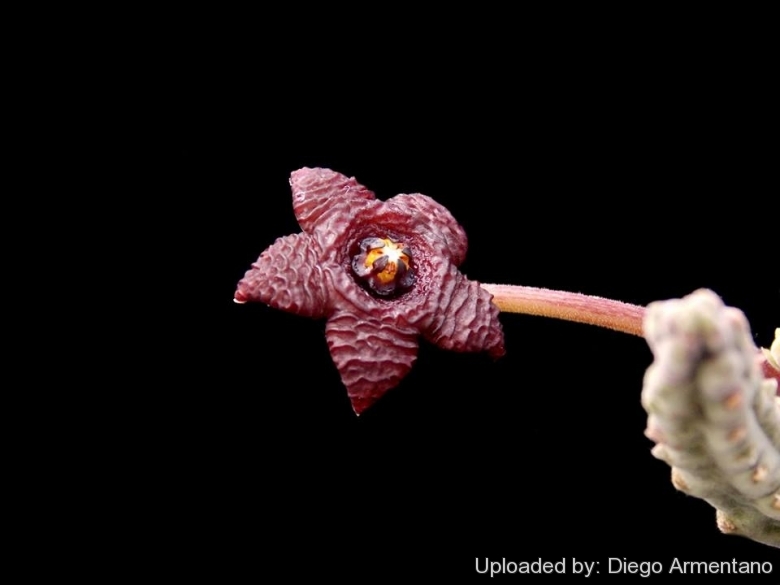 Description: Stapelia similis is a tufted cactus-like plant with small-sized and showy dark purple star-fish shaped flowers. It is a variable species with several forms both in the wild and in cultivation. Stapelia similis the “similar Stapelia” reflects in its name the close relationships in appearance it has with Stapelia kwebensis, Stapelia kwebensis var. longipedicellata and Stapelia parvula along with it forms a closely related group.
Habit: It is a relatively large, perennial, stem succulent that can form large compact clusters up to 15 cm tall and 40 cm in diameter (or more).
Stems: Erect, bluntly 4-6-angled, 7-15(-25) cm long, 1-1.5(-2) cm across, tapering slightly towards their tips and with Regularly spaced tooth on the angles. The stems vary in colour between greyish green and dark purple and are covered in fine hairs.
Leaves: Rudimentary, ephemeral, inconspicuous, occuring on the tooth along the marginal ridges, but drying already from young stems and persistent as white spines.
Flowers: 3-6(-10) arising at the base of the flowering stems, opening in sequence and flatly spreading on the ground. Pedicel 2.5-2.8 cm broad, spreading or decumbent. Corolla rotate, flat, rarely slightly campanulate, centrally with a flat cup-shaped or tubular depression, opening thickened annulus-like, 1.5-2.5 cm across, 0.5 cm long, inside transversely ridged, yellow-brown, darck purple to black-brown, not lined. Hairless. Centre of limb concave to campanulate. sometimes surrounded by weak annulus. Lobes ovate, acute or shortly acuminate, without cilia. Corona brown to black. Outer corona-lobes transversely oblong, sometimes apparently absent. Inner corona-lobes 2-3 mm high, transversally rectangular, truncate, at times broadly pointed or rounded, diverging or extremely far out-curved lying against anther, without extended inner horn or dorsal wing. Pollinia orange, rarely brown, ca. 0.45 x 0.3 mm, D-shaped
Fruit: Flies pollinate the flowers resulting in the typical twin seed horns (follicles), which are decorative in themselves and often don't appear until a year later.
Blooming season: Flowers are intermittently produced throughout the late summer and autumn.

Subspecies, varieties, forms and cultivars of plants belonging to the Stapelia similis group 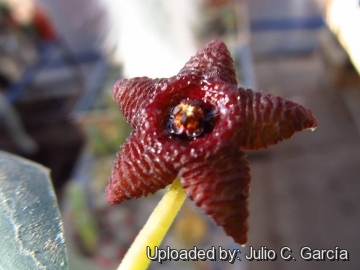 Stapelia similis Photo by: Julio C. García
Send a photo of this plant.

Cultivation and Propagation: Stapelia similis is an easy obliging blooming plant when mature, which is happy in any average succulent house.
Soil: Since roots are quite shallow, use a cactus mix or add extra perlite or pumice to regular soil potting soil. A gritty, very free-draining compost is suitable, and clay pots help the plants to dry out between watering.
Watering: Stapelia require moderately watering through the growing season but enjoy plenty of water and some fertiliser in hot weather, this helps them to flower freely. Water more sparingly in winter according to temperatures. But, as with most asclepiads, it is unwise to leave them wet in cold weather.
Hardiness: Winter care presents no problems at 5°C with plenty of light.
Sun Exposure: Partial sun or light shade.
Pest and diseases: Stapelia species vary in their susceptibility to rotting, but are generally fairly easy to grow, especially if kept pest-free. They are very susceptible to stem and root mealy bugs, and damage from these may well initiate fungal attack. If you do have problems with a stem or with basal rotting, you can reliably isolate the healthy parts, dry them off, and re-root them in moist compost.
Cultural Practices: Re-pot every 2 years.
Propagation: Easiest with stem cuttings. Allow cuttings to dry a day before planting. Stems must be laid (Not buried) on gritty compost and will then root from the underside of the stems. It can also be increased from seeds sowing in spring in moist, sandy peat moss. Barely cover seeds.