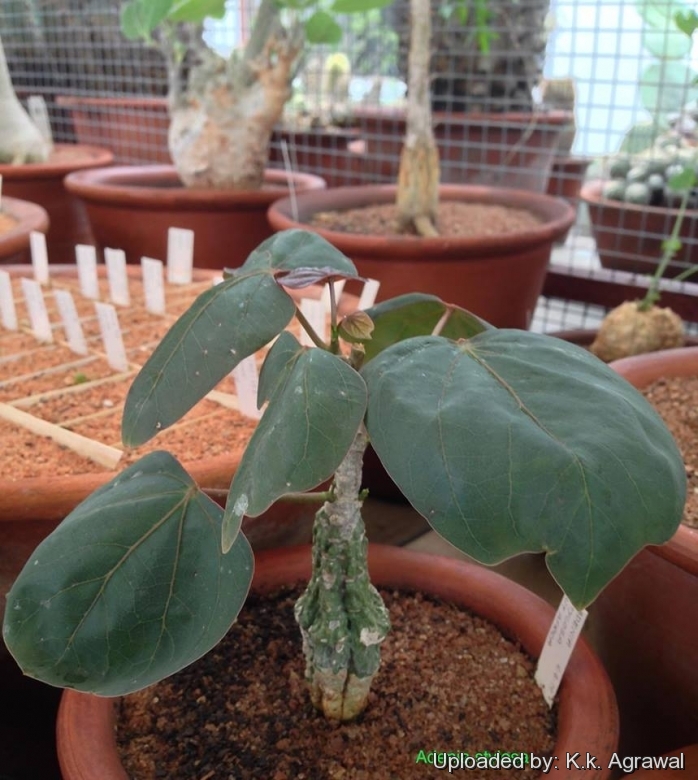 Origin and Habitat: Endemic to Northern Madagascar, in Ankarana National Park (Antsiranana province) and other places outside protected areas like Montagne des Français, Orangea/Rigny. It is known only from 2-5 localities.
Habitat and Ecology: It grows in shade in dry forest and scrub usually wedged between rocks in dry inselberg of famed tsingy, limestone formation and on Rock Faces. It is reportedly slow-growing and at least locally shows poor regeneration rates. It can be locally common and occurs in a number of protected areas. It is in some demand internationally as a horticultural plant, grown chiefly by specialist collectors of succulents. It may be assumed that most or all of the large-sized plants on trade were wild-collected plants. Populations have been reduced in areas where the species is collected for export, because there is no control, collectors tend to take all the specimens they come across and it is difficult to distinguish between young specimens and mature ones in the field.

Description: The Candlestick Plant (Adenia stylosa) is a pachycaul shrub or liana forming a tangle of twisted stems raying out every which way from an extraordinary hard, conical, irregular, bumpish green caudex looking like a mountain shaped candle with melting wax coming down. Male and female flowers are borne on separate plants. Pale yellow flowers open on the tendrils in the spring and summer.
Caudex: The above-ground trunk or caudex (an immense, storage stem, actually a distinctly swollen hypocotyl, the portion of the stem below where its cotyledons were attached and fell away in the seedling's infancy) is spheroid to bottle-shaped, gnarled, very wrinkled, irregular, waxy, and can grow up to two metres tall (usually less tha 50 cm tall) and to 25 or even 30 centimetres in diameter. However, it occasionally develops into a smooth conical trunk in older plants. In the field, observed juvenile caudices were consistently epigeous, occasionally bright green, and wrinkled. Most pachycaul Adenia retain the green photosynthelic epidermis in old stems throughout the life of the plant, but in Adenia stylosa the green epidermis is gradually loosed and as the caudex matures and thickens, it develops an attractive, beige furrowed bark.
Annual stems: Vine-like, herbaceous, succulent, sprouting in the summer, up to 3.5 m in length straggling, trailing, creeping or climbing into the surrounding vegetation where they support themselves by means of tendrils. The basal parts sometimes ± woody. In the winter, the vining branches die back to the base and it enjoys a dry rest.
Leaves: Heart-shaped or bell-shaped, new leaves purple-violet to dark green varying between individuals with dark red veins. Juvenile leaves of A. stylosa, like those of some Adenia firingalavensis have a finger-like peltate projection at the median of the base of the blade. There are several forms of A. stylosa, which differ in leaf habit (either lobed or solid) and leaf color. Forms from Ankarana tend to have dark red to black leaves - rarely lime-green with white veins, whereas further north (Orangea, Montagne des Francais), immature leaves are shiny and red, maturing to dull green.
Flowers: Small pale yellow or greenish white.
Similar species: Adenia stylosa resembles Adenia firingalavensis, but molecular and morphological data suggest it is a separate species. Moreover, the stems of J. stylosa tend to be wrinkled, beige, and spheroid at maturity whereas stems of A. firingalavensis tend to be smooth, remain green throughout life, and are lengthened cones in shape. 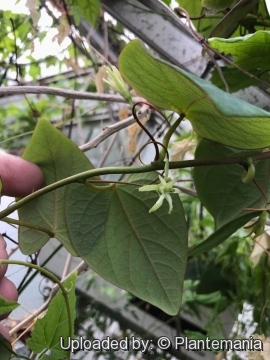 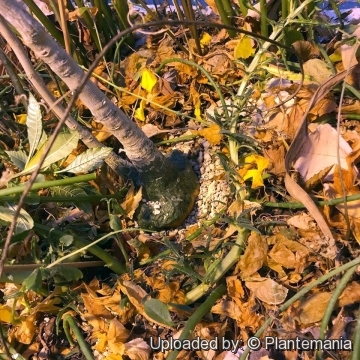 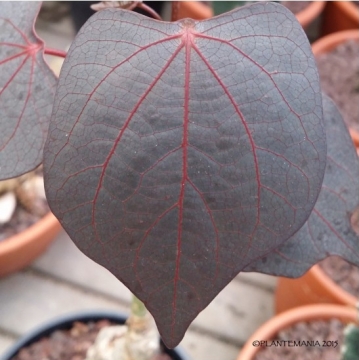 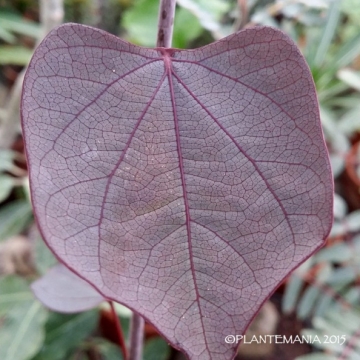 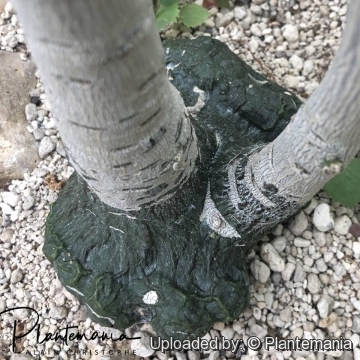 Cultivation and Propagation: Beloved by collectors, Adenia stylosa is an excellent pot plant and it should make an interesting addition to a collection. It can be grown outdoors in frost-free climates and forms an impenetrable shrub if not manicured.
Growth rate: It grows well, though very slowly, but it possible to increase the speed of growth to some extent by providing adequate amount of water, warmth, and fertilizer during the active growing season, but it’s susceptible to rotting if too wet.
Exposure: It needs light shade, but the caudex should be in the shade, while the leaves prefer some sun. Avoid direct blasting sun in summer. Bright light if grown indoors.
Soil: It needs a very porous potting medium (add pumice, vulcanite, and perlite). It does better in a rather acidic soil.
Waterings: Water frequently while plant is in full growth, but keep dry during the winter after the branches have died back. It rot easily and do NOT like a lot of water when it has no leaves.
Fertilizer: Benefits from moderate doses of a well-balanced, slow-release fertilizer.
Frost tolerance: Due to its African origin keep warm in winter, the minimum safe average temperature is 15°C, although it can go lower for short periods. It can be grown outdoors in frost-free climates, need anyway to kept above 10°C and dry in winter. It is very prone to rot in cool, wet conditions. USDA Zone 12, but does very well in containers.
Maintenance: Repot every two years. It like pots with generous drain holes. In the winter, the vining branches die back and should be cut back to encourage branching, to maintain an attractive shape and to ensure caudex habit. If pruned and kept somewhat pot bound, it can be maintained at a manageable size, depending on what ''manageable size'' means to you.
Uses: The bark, which is toxic, is used to treat scabies.
Propagation: The species can be propagated by both seeds and cuttings. The plants for seed production are generally grown from cuttings since these bloom more freely. The plants for decoration are grown from seed since they develop a caudex.
Warning: As with all Adenias, all parts of this plant are very toxic, and they should be handled with caution, particularly when pruning.