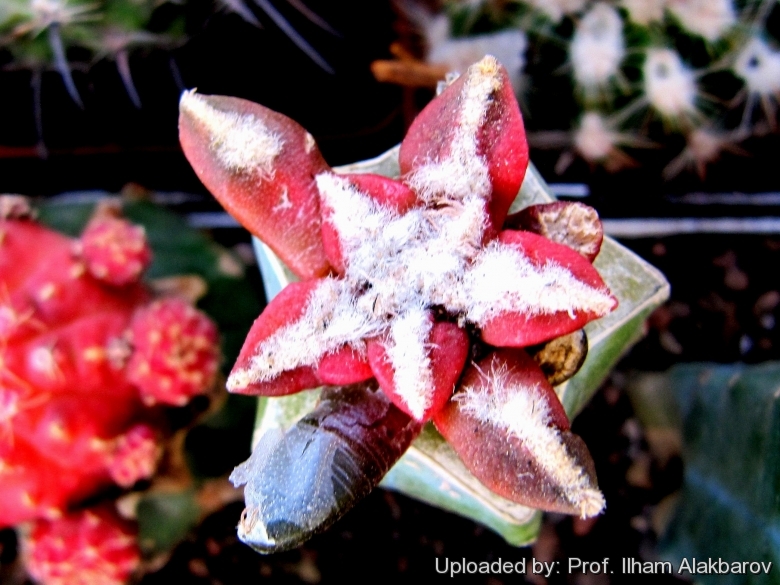 Description: Ariocarpus kotschoubeyanus are very flat geophyte cactus that produce small star-shaped rosettes. They in most cases don't reach more than only a few centimetres above the ground. Although they can form clumps, often only a small disc of tubercles can be seen flat at the soil surface, however these plants grow a large tap root below the surface of the compost.
Forma rubra (red form): The red schizochromic form (Astrophytum asterias var. nudum f. rubra) has bright orange-red stems due to the absence (or reduced production) of chlorophyll pigments: every other pigment is present at normal levels, the dominant green colouration is lost, but will still more than likely have normal other pigments that give the yellow overall appearance of the stem. This form with red stems is very attractive and highly prized. This schizochromic form is almost always seen grafted on stronger columnar species, and cannot can be grown on its own roots. However some clones have enough chlorophyll in their tissues and can be grown on they own roots too, but very slow growing.
Stem: Usually solitary, rarely giving rise to side shoots from old areoles, flattened on top, depressed centrally.
Tubercles: The tubercles are deltoid orange red to dark purple with no spines. They are more long than wide, closely packed and divergent, sharply angled apically.
Areoles: The tubecles forms a central longitudinal areolar groove extending to the tips on the adaxial surfaces of the tubercles, woolly, 1-3 mm wide, 5-10 mm long.
Flowers: These plants have a woolly crown, from which emerge bright pink-violet flowers up to 2.5-5 cm, 2 times wider than long when fully expanded. Flowers are diurnal and last for 3 to 4 days.
Blooming time: Mid-September onwards.
Fruits: White with lots of seed.

Cultivation and Propagation: Variegated and albinos cacti are regarded as choice and difficult in cultivation, but despite that many of them are relatively easy to grow. But be aware that they cannot tolerate prolonged exposure to direct sun light (especially during the hottest summer days), so grow them in half-shade or under filtered sun. They are sometime seen as grafted plants, but many grow well on their own roots, too.
On the contrary, the albinos can survive only if grafted on a strong green base.
Use mineral well-permeable substratum with little organic matter (peat, humus). Water sparingly from March till October and keep perfectly dry in winter at temperatures from 5 to 15 degrees centigrade. (In general these plants are more tender and cannot endure freezing temperatures ) In the rest period no high atmospheric humidity!!
Propagation: Usually by seed. Plants are often grafted onto column-shaped cacti.