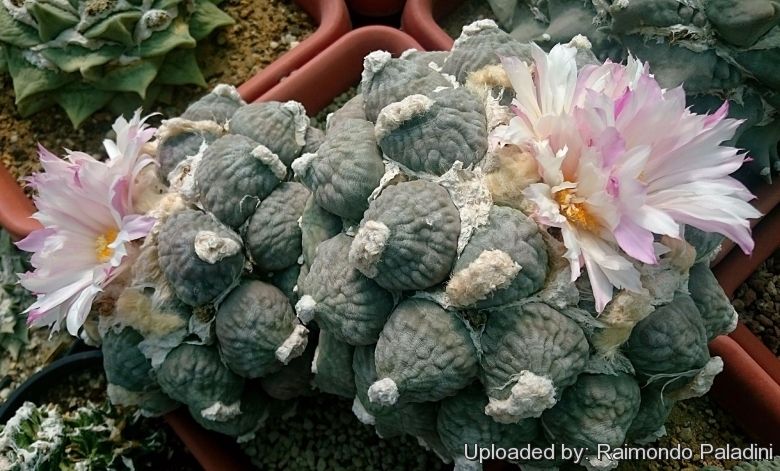 Description: Unlike the type species that has more or less triangular tubers, Ariocarpus retusus cv. Maruibo has fat round tubercles that look like small spheres ending with a large woolly areolae. 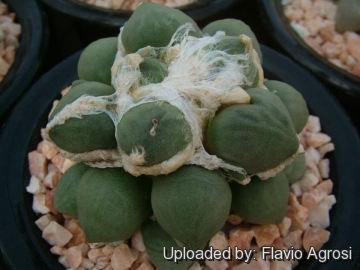 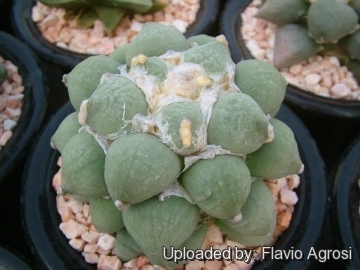 Cultivation and Propagation: Ariocarpus retusus is slow growing but certainly not as slow as some other types of cacti, it is of easy culture in a well drained, non-organic, free-draining soil compost, with ample water during the growing season.
Growth rate: Slow growing. It needs about 8-12 years to reach the typical, definite outlook.
Soil: Grow it in an open sandy-gritty cactus compost.
Fertilization: Use of a weak low-nitrogen fertilizer during the growing season can encourage growth.
Special need: Provide very good ventilation. Nearly all problems occur as a result of overwatering and poor ventilation, especially when weather conditions are dull and cool or very humid.
Pest and diseases: The main threat to their development is root rot. Ariocarpus should be kept dry whenever there is a threat of cold.
Watering: The appearance of Ariocarpus can benefit greatly by watering the plants from the bottom. This practice will help to keep the “wool” on the top of the plant from becoming matted or discoloured.
Exposure: It need light shade to full sun.
Frost Tolerance: When dormant, plants are relatively cold-tolerant (Hardy to -10° C), but for safe cultivation it is best to avoid temperatures below 0° C.
Propagation: It is probably the easiest species of the genus to raise from seed, but will generally take about 6-10 years to reach flowering size, often grafted. The seeds can be sown in pots of fine, well-drained sandy soil, any time during the spring when temperatures are warm. Cover the seeds with a fine layer of grit and water from below with a fungicide to prevent damping off. For the 1-2 weeks cover the pots with a sheet of glass/clear perspex to keep the humidity levels high. Remove the glass and replace it with light shade-cloth and mist once or twice a day for the next two weeks after which most seeds should have germinated. From then on mistings can be reduced to every second and then every third day as the little plants grow.