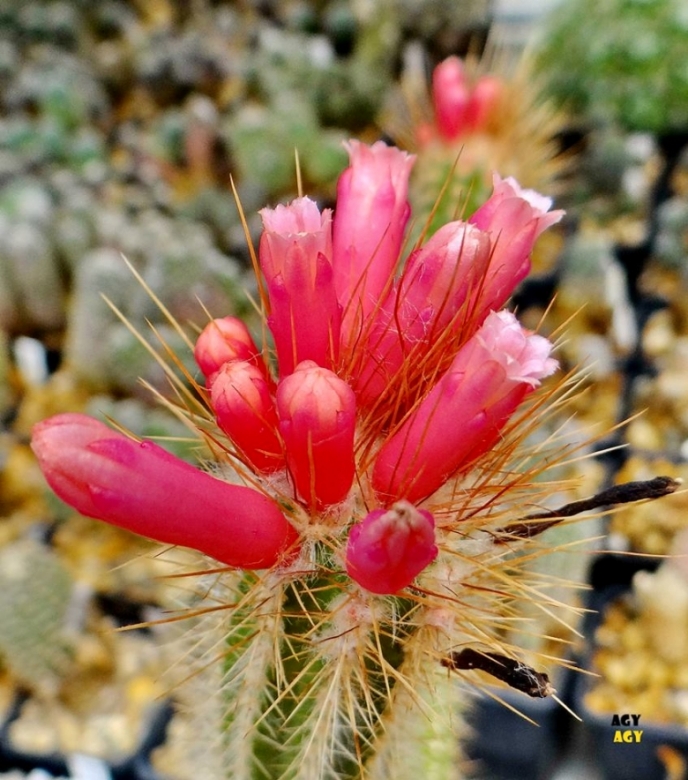 Origin and Habitat: This cactus is endemic to central Bahia, Brazil (partly inside the 'Parque Nacional Chapada Diamantina' and the 'APA da Serra do Barbado', Bahia). Extent of occurrence is 19,000 km2. The species is scarce and seems to be severely fragmented.
Altitude range: 1,000 to 1,950 metres above sea level.
Habitat and Ecology: This northern campo rupestre (Chapada Diamantina) element grows on cliffs and on quartzitic and sandstone rock ledges in sun or deep shade. Climate change (less precipitation) can have a large impact on this species, as it uses the fog as a water resource during the dry season, which helps the seedlings to establish and the plants to survive. Even though it grows in inaccessible areas, the plant is collected at a level that represents a threat to its long-term survival. It is classed as Vulnerable on account of its small population size and ongoing overcollection of seeds.

Description: Arrojadoa bahiensis (synonym Pierrebraunia bahiensis) is a solitary, globose to cylindrical, cactus that produce dense clusters of tubular pink flowers at the crown.
Derivation of specific name: “bahiensis” for the occurrence in the State of Bahia, Brazil.
Stem: Green to grey green, initially spherical, gradually becoming short cylindrical up to 30 cm high and 8 cm wide, old plants may reach the hight of 110 cm and occasionally may branch from the base.
Ribs: 9–14, vertical, rounded on the edges, about 10-17 mm tall and up to 18 mm wide.
Areoles: Round, with creamy white or brownish wool at first, later naked.
Spines: Finely needle-like, slightly flexible, short, yellowish to reddish brown, becoming grey with age.
Central spine: One, up to about 3 cm long.
Radial spines: 6–11, as many as 23 on older areoles, erect or spreading, usually less than 1.6 cm long (noticeably shorter in young specimens), but on occasion up to 4 cm long.
Roots: The underground system of Arrojadoa bahiensis is formed by a simple taproot bearing short lateral fibrous roots. Conversely other species of this genus (e.g. Arrojadoa dinae and Arrojadoa hofackeriana), have a more complex root structure with the presence of contractile roots and tubers.
Cephalia: Unlike other congeneric species that form a cephalium with bristles and wool, Arrojadoa bahiensis lacks this structure and its flowers appear numerous from the areoles on, and around the crown.
Flowers: Numerous, tubular, bright rose to pink, 3.2-3.9 cm long, 0.8-1 cm in diameter. The white tip of inner tepals contrast nicely with the pink tube. The plants bloom at night.
Fruits: Globose to ovoid, rose to pink. 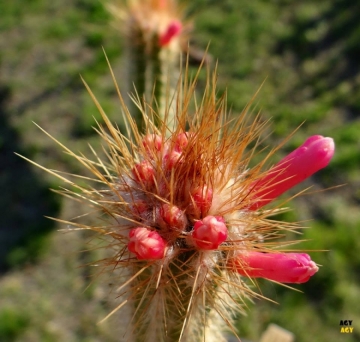 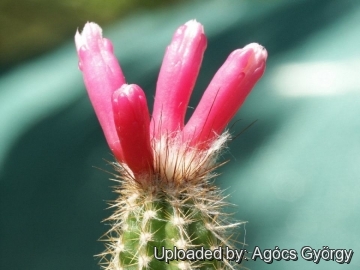 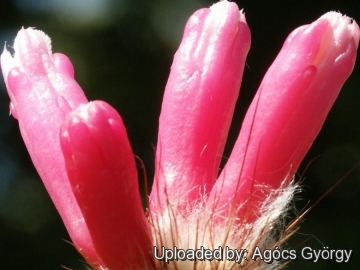 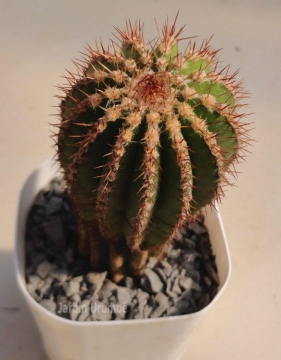 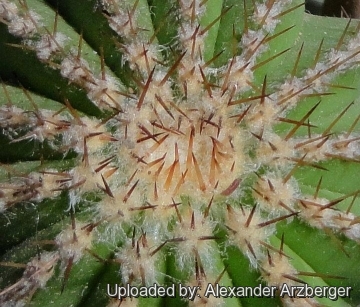 Cultivation and Propagation: These tropical cacti are not the easiest things to grow and aren’t plants for beginners.
Growth rate: It is a relatively rapidly growing given the best conditions.
Soils: It requires a rich but very porous mineral cactus mix soil.
Repotting: The root system is weak and generally resents being repotted and can take a long time to re-establish. Use pot with good drainage.
Light: They prefer very bright light, not as much as the most arid growing cacti, but plenty nonetheless. Tends to bronze in strong light, which encourages flowering and heavy spine production.
Watering: They grow from April to October and cannot endure long stretches of total dryness, and also too much water will rot them, as their weak root systems tends to be inefficient at sucking up water from wet soil. Nonetheless, again as a result of their tropical origins, they need a fair amount of water, but allow the soil to dry quite a bit before watering again.
Fertilization: Do not feed in winter.
Hardiness: They rest from October to April but can’t stand cold, or even fairly cool temperatures, so is indispensable to keep them above 8-12°C at all times, severe damage or death occurring at temperatures that the great majority of cacti wouldn’t mind in the least and prefer more frequent water in winter than other cacti, say once a month. (but hardy to 4 C ° C for short periods). However warmth throughout the year will increase the grower's success (minimum 12° to 20° C during rest season).
Pests & diseases: It may be attractive to a variety of insects, but plants in good condition should be nearly pest-free, particularly if they are grown in a mineral potting-mix, with good exposure and ventilation. Nonetheless, there are several pests to watch for:
- Red spiders: Red spiders may be effectively rubbed up by misting the vulnerable plants every day
- Mealy bugs: Mealy bugs occasionally they develop aerial into the new growth among the wool with disfiguring results, but the worst types develop underground on the roots and are invisible except by their effects.
- Scales: Scales are rarely a problem.
- Rot: it is only a minor problem with cacti if the plants are watered and “aired” correctly. If they are not, fungicides won't help all that much.
Propagation: Exclusively by Seeds. Sow in February-march in a light, sandy, porous soil. Cover germinating tray with glass to prevent seed from drying out. Germination is most successful at a temperature of 18 to 22° C. It can also be propagated by lateral offshoots (if available), grafting is not necessary.