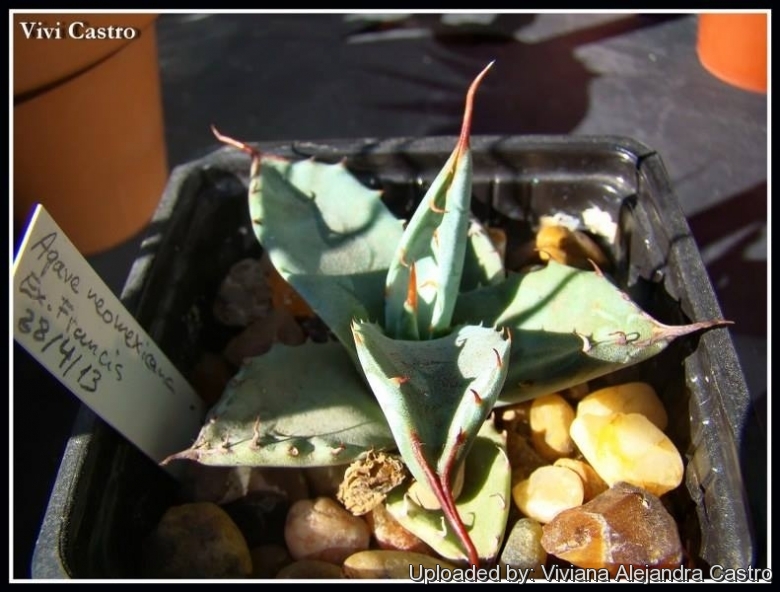 Description: Agave parryi ssp. neomexicana (New Mexico Century plant) is a small, but very cold hardy plant, about 30-45 cm tall and 40-60 cm across, with light glaucous grey to light green leaves in a symmetrical rosette. Agave neomexicana resembles Agave parryi but with narrower triangular shaped uniformly blue-green to powder blue leaves edged with dark burgundy spines, that in some forms are very striking. It can remain somewhat solitary but often suckers to form small colonies. Like all agaves, A. neomexicana only flowers once, after which the original plant dies; but since it suckers freely, new plants will replace it. The inflorescence can be quite colorful with red or orange-red flower buds and open flowers of a brilliant golden yellow. Plants of Agave parryi ssp. neomexicana are about the same size as those of Agave parryi var. couesii, and the two might be difficult to tell apart.
Rosettes: Freely suckering, few to many-leaved, rather flat-topped.
Leaves: Uniformly light glaucous grey to grey-green, 20-45 cm long, 5-12 cm wide, lanceolate, usually broadest near middle, rigid, thickly rounded below, concave above armed above mid-blade with brown to grey straight marginal spines mostly 5-7 mm long, 1-3 cm apart, nearly straight or retrorsely barbed, each barb arching backward, slender, dark brown to greyish and a stout 2.5-5.5 cm long reddish brown. There are smaller teeth on the lovver part of the leaves. Terminal spine subulate to acicular, flat above in a broad shallow groove, decurrent for 1 to several teeth.
Inflorescences: Paniculate on a 3-4 m tall candelabra type stalk with rather distant scarious reflexed triangular bracts, with mostly 10-17 compact umbellate branches in upper half of stalk.
Flowers: 55-67 mm long, deep yellow to orange inside emerging from orange-red buds
Blooming season: Flowering for this species occurs in late spring and early summer. The plant takes 15 years to mature and bloom, then it dies.

Subspecies, varieties, forms and cultivars of plants belonging to the Agave parry group

Agave parryi is widespread over a vast territory giving rise to a corresponding amount of variability. This variability has been recognized by botanists and the current thinking by agave taxonomists is that Agave parryi consists of two subspecies: Agave parryi ssp. neomexicana and A. parryi ssp. parryi. The ssp. parryi is further divided into four varieties; the nominate form, var. couesii, var. huachucensis and var. truncata. The distinctions between the varieties are somewhat ambiguous and, although the varieties are weakly differentiated, it appears that there is some geographic separation between them.

Cultivation and Propagation: Agave parryi ssp. neomexicana is usually cultivated outdoors in rock gardens, in cactus and succulent gardens, as it is very cold hardy, withstanding temperatures as low as -28° degree Celsius. It suckers, but tends to be slow to sucker, so easy to keep control of. Because of its compact size, plus its low water use and low maintenance, it is considered a good landscaping plant for desert residential landscaping.
Growth rate: Slow to medium growing, but speeds up considerably given the best conditions.
Exposure: They do well in full sun or a lightly shaded area with afternoon shade.
Soil: They do best in very well-drained, sandy or gravely soil. As an ornamental it is also grown in containers where it stays smaller than its outdoor brethren. In pots they need a very porous mix soil (e.g. 2 parts peat moss to 1 part loam to 1 part of pumice).
Repotting: Use pot with good drainage.
Fertilization: They grows quickly if kept well nourished with a slow release fertilizer specifically formulated for cactus and succulents applied once or twice a year (poor in nitrogen), including all micro nutrients and trace elements.
Hardiness: Agave parryi is one of the most cold hardy of the agaves, (hardy to -18 to -28°C depending by clones (USDA zones: 5-11).
Scenography: These striking plants are wonderful when used for accent or simply to provide some all year round foliage and often used in a pot as a patio plant, can be moved around to change the scenery or position to give more shelter.
Traditional uses: This plant was called Mescal in association with the Mescalero tribe of the Native American Apache who roasted and ate the plant.
Warning: The spines along the sides of the leaves are retrorsely barbed, each barb arching backward; should one become embedded in the flesh of your finger, it would not come out easily.It
Propagation: Seeds or suckers which often are found growing around the base of the plant, Remove the basal suckers (if available) in spring or summer and let the cuttings dry for a few days before inserting in compost.