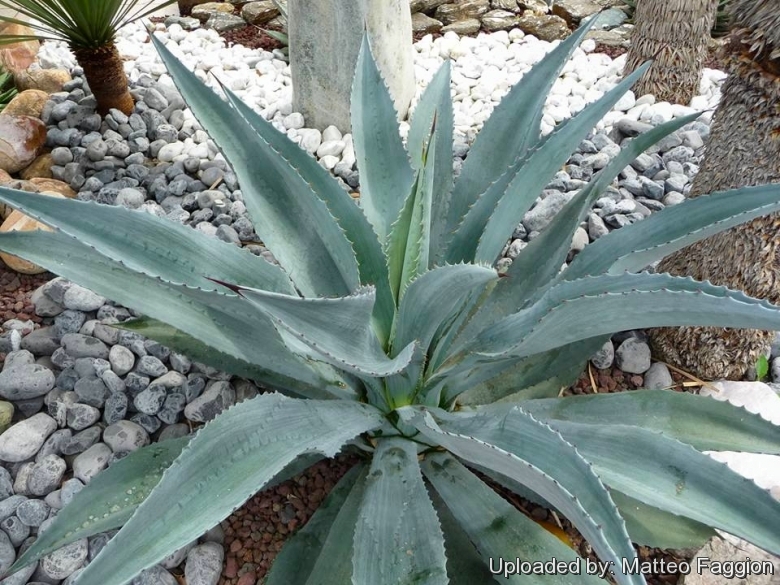 Description: It is a medium-large sukering species that does not attain the huge proportions of the Agave americana commonly found in the Mediterranean climes. The Subsp. protamericana differs from the cultivated Agave americana in its greater variability in form, spination and colour of the leaves which generally are shorter, compact and wider. The inﬂorescence generally has fewer branches. It has proven to be very desirable in the smaller landscapes and is more moisture and cold hardy than its cousins. The most striking being the blue forms.
Stem: Stemless or short-stemmed.
Leaves: Broadly lanceolate. 80-135 long, 17-22 cm wide, quite rigid, narrow above the thick fleshy base, convex below, becoming plane to channelled above, light glaucous-grey to pale-green, sometimes cross-zoned, with often pronounced bud imprints on the leaf surface, the margin crenate. Teeth 5-10 mm long from low broad bases and almost regular in size and spacing, straight to curved, dark brown to grey. Apical spine 3-6 cm long subulate, dark brown to greyish brown, shortly decurrent, openly grooved above.
Inflorescences: 6-8 m tall panicles; stalk with small bracts and with 15-20 wide-branching laterals in upper half (or third) of stalk.
Flowers: About 75-90 mm long, on slender pedicels; ovary 38-45 mm long, cylindric or fusiform; tube deeply funnelform, l5-20 mm long, thick-walled, deeply grooved, tepals unequal, the outer 20-30 mm long; ﬁlaments 60-70 mm long; anthers 25-35 mm long, eccentric; capsules small, 3,5-4 x 1.6-2 cm, oblong, thin-walled, light brown, stipitate, short-beaked.
Blooming season: Late spring to summer, often flowering after 8-20 (or more) years.
Seeds: 7-7.5 x 5-6 mm, lacrimiform, black.

Subspecies, varieties, forms and cultivars of plants belonging to the Agave americana group

Notes: (from: Popular Science - Nov 1909 - Page 443) The great ﬂowering shoots represents the culminating vital activity of the whole life of the plant. Slowly through the years the materials have been gathering for this particular task, and ﬁnally in a few short weeks of summer the supreme work is consummated, and the great candelabrum of branches stands forth with its hundreds of seed capsules, while the erstwhile luxuriant leaves are sere and withered, their substance, as indeed the whole life of the plant, sacriﬁced to this one supreme effort toward the propagation of its kind. When in bloom the inﬂorescence is surrounded by myriads of flies and other insects attracted by the abundant nectar which the flowers secrete. When the seeds are ripe the pod splits down from above and spreads apart slightly, so that a few seeds are easily shaken out by a gust of wind. The inﬂorescence, though dead, may stand for a year or more, and the seeds that it bears may be scattered over a wide area. 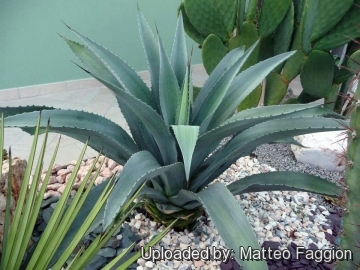 Cultivation and Propagation: They are usually cultivated outdoors in rock gardens, in cactus and succulent gardens, in Mediterranean-style landscapes, in borders, or as a specimen. Need full sun and a very well-drained, slightly acidic, sandy or gravely soil. As an ornamental it is also grown in large containers where it stays much smaller than its outdoor brethren. It is hardy to about -9° to - 12° C, particularly when dry but it is best to avoid severe freezing temperatures. Keep it in a cool, frost-free area in winter and put it out on the balcony or patio in summer. It grows fairly fast in summer if provided with copious water but allows to dry thoroughly before watering again. During the winter months, one should only water enough to keep the leaves from shrivelling. They do well in full sun or a lightly shaded area.
Warning: It can get very large, and it is armed with needle-sharp spines.
Propagation: By seeds or (usually) suckers which often are found growing around the base of the plant, Remove the basal suckers (if available) in spring or summer and let the cuttings dry for a few days before inserting in compost.
Uses:
Landscape: These striking plants are wonderful when used for accent or simply to provide some all year round foliage and often used in a pot as a patio plant, can be moved around to change the scenery or position to give more shelter.
Medicine: The sap of century plant is used as a diuretic and a laxative. The juice of the leaves is applied to bruises and taken internally for indigestion, flatulence, constipation, jaundice and dysentery.
Food: The flower stalk and heart of century plant are sweet and can be roasted and eaten. The seeds are ground into flour to make bread and to use as a thickener for soups.
Alcoholic drinks: If the flower stem is cut without flowering, a sweet liquid called agua miel ("honey water") gathers in the heart of the plant. This may be fermented to produce a beer-like drink called pulque, which may then be distilled to produce mezcal.
Fibres: The leaves also yield fibres, known as pita, which are suitable for making rope, matting, coarse cloth and are used for embroidery of leather in a technique known as piteado.