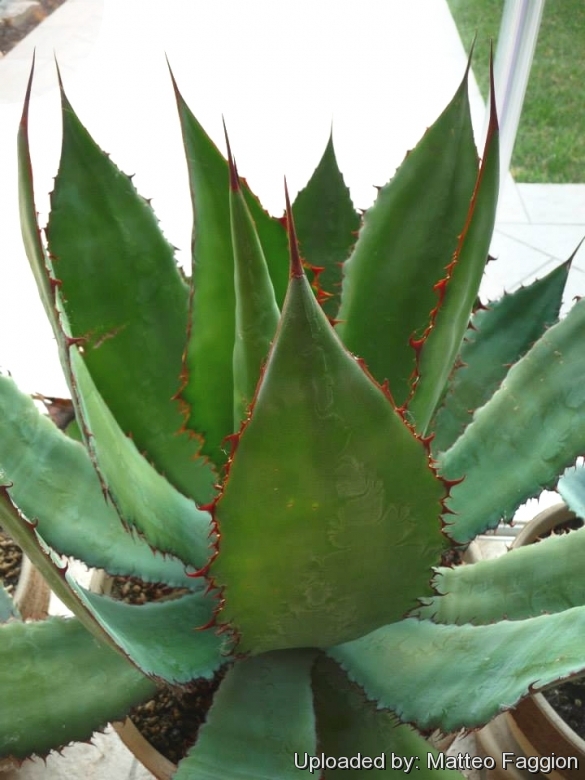 Agave bovicornuta Photo by: Matteo Faggion
The leaf blades are attractively edged with large reddish dark brown teeth on large teats, some recurving back towards the base and others towards the leaf tip, which has a short stout terminal spine.

Description: Agave bovicornuta is a perennial medium-sized, non-suckering plant with a short stem, forming a solitary light green, open, rosette that usually grows wider than it gets tall, maxing out at about up to 80-100 cm in height and 1.5-2 m wide, but frequently smaller. It is quickly recognized by its large size and bright green, decorative, broadly lanceolate or spatulate leaves, that are 45-60 cm long and 10-15 cm wide. The most sought after forms have very broadly spoon-shaped leaves with deliciously wicked teeth. Yellowish-green flowers are borne on a stalk up to 5-6 m tall after the plant overcome the age of 10-12 years.
Derivation of specific name: The common name Cowhorn Agave reflects the specific epithet derived from the Latin 'bovi', meaning cow, and 'cornu', that means horned and alludes to the marginal spines, many of which will curve both away from and towards the tip, resembling the horns on a cow.
Leaves: They are fleshy, highly ornamental, broadly lanceolate or spatulate, widest at or above the middle, much narrowed toward the base, their margins are serrated, 45-60(-80) cm long, 10-15(-20) cm wide. In young plants the leaves are deep green to bluish green, smooth, but becomes yellow-green when adult. The marginal teeth are very prominent and come in two sizes. The larger teeth are mostly 8-12 mm long, flexuous and slender above a broad base, mostly 2-4 cm apart, the smaller mostly 2-5 mm long, while the smaller teeth are in between the larger ones, creating intricate bud prints that are highly visible. The teeth's colour ranges from a brilliant, glowing yellow to a cinnamon reddish orange to chocolate brown on new leaves, turning dark chestnut brown on older leaves. In the tip of the leaf, the margins fold up to form a raised edge that continues into the 1.3-3.8 cm long openly grooved terminal spine. The spine is dark chestnut brown on new leaves, turning ash grey on older leaves.
Inflorescence: Scapes are 5-7 meter tall, narrowly branched with many short side branches laden with 5.5-6.5 cm long, they turn bright yellow and green flowers clustered at the branch ends.
Blooming season: The flower stalk begins to emerge in autumn, grows slowly over winter and matures during the spring. 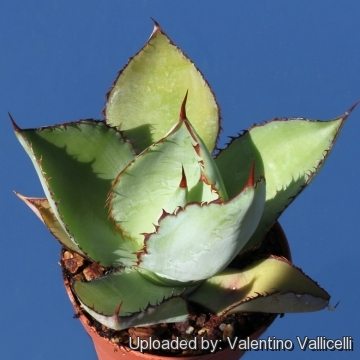 The broad leaf surfaces are decorated by impressions made by the margins of other leaves as they emerge from the center. Photo by: Valentino Vallicelli 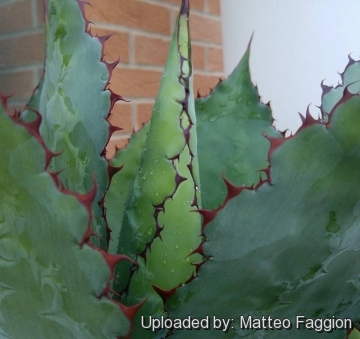 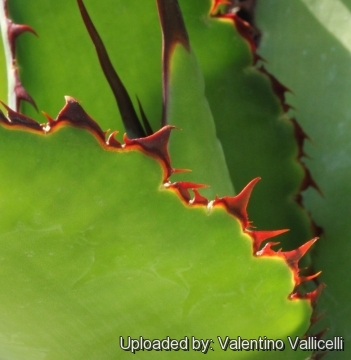 The leaves of the striking Agave bovicornuta have exceptionally beautiful marginal teeth. Photo by: Valentino Vallicelli 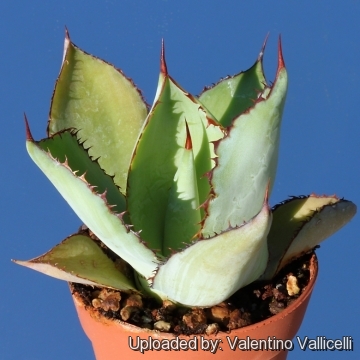 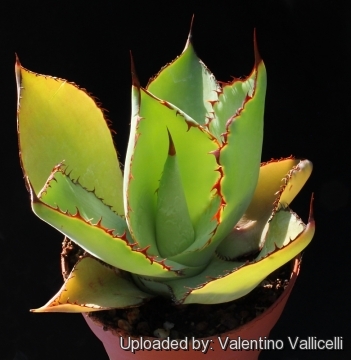 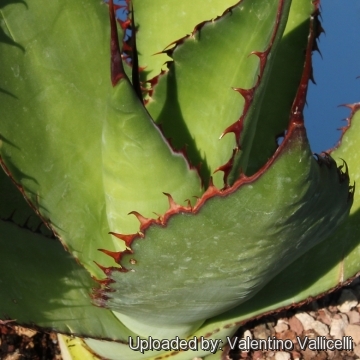 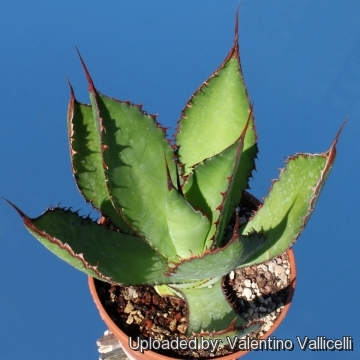 Agave bovicornuta Photo by: Valentino Vallicelli
Send a photo of this plant.

Cultivation and Propagation: The Agave bovicornuta, because of its compact size and its low water use and low maintenance, is considered a good landscaping plant for desert residential landscaping. As this plant does not sucker, it will need replacement after flowering .
Soils: Agave bovicornuta does best in very well-drained, sandy or gravely soil, but as most of this species, this one is not very particular about the type of soil it is in as long as it has good drainage. As long as the soil is not soggy in the winter, this agave can be grown as a landscape plant in frost-free areas of the world.
Repotting: Use pot with good drainage.
Fertilization: They grows quickly if kept well nourished with a slow release fertilizer specifically formulated for cactus and succulents, one that is poor in nitrogen and has all micro nutrients and trace elements. The fertilizer should be applied once or twice a year.
Water requirements: Although moderately drought tolerant, the plants will grow faster when given consistent supplemental water in the summer.
Hardiness: Outdoor grown Agave bovicornuta requires some frost protection when overnight lows drop to -3 to -4 C for an extended period, whereas the temperatures drop under -6/-7 C it has to put in a container and set indoor.
Exposure. Plants are best grown in filtered light in the hot summer months. They can tolerate full sun if given sufficient supplemental water in the summer.
Pest and diseases: Very hard but susceptible to fungal attack. The key in order to avoid these diseases is to ensure they have perfect drainage with little soil so that rainwater quickly passes past their roots and doesn't stand.
Landscape value: Place this agave under a small tree in a highly visible spot to best appreciate the intricate patterns created by the ornamental teeth.
Traditional uses: This is one of the larger broad-leaved agaves used for making the distilled liquor "mescal." However, it is regarded as inferior to other species. Agave bovicornuta is also eaten by the Tarahumar of Mexico, but only rarely because its cooked heart is extremely bitter. Mature hearts are baked in a covered or open earth oven. Its flowers were once washed and used to make tortillas.
Warning: The juice of the leaves is very caustic on the skin and cause dermatitis. The spines along the sides of the leaves are retrorsely barbed, each barb arching backward; should one become embedded in the flesh of your finger, it would not come out easily.
Propagation: By seeds or micro propagation (tissue culture). Because this plant does not naturally sucker or produce bulbils on the flower stalk and needs cross pollination for seed set, plants in landscapes generally only last one generation.