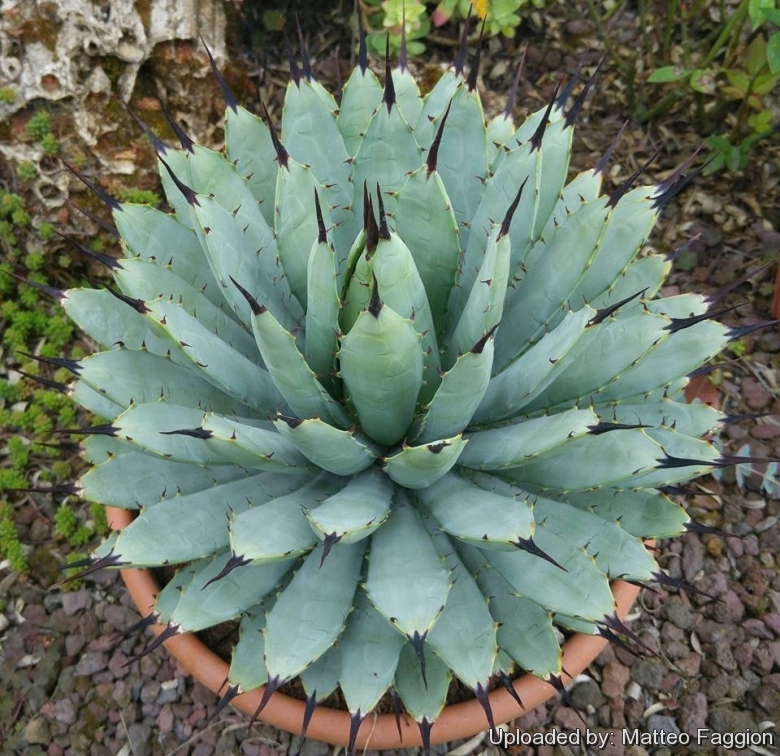 Origin and Habitat: Agave macroacantha is native to northern Oaxaca and also near the town of Tehuacan in the State of Puebla, Mexico
Habitat and ecology: It grows in barren rocky, very arid terrain. It is common on the dry sedimentary slopes about Tehuacan.

Description: Agave macroacantha (Black-spined Agave) is a medium sized agave that forms dense clumps to 60 cm tall by 1.5 m wide composed of very regular leaf rosettes of a bluish grey colour that can be basal or can grow on a very short stem. Leaves are succulent, narrow sword-shaped blue-grey or greyish green and up to 35 cm long at a maximum, ending in sharp, contrasting, black spines at the tips. Flowers are small, purple-tinged green with a fuzzy interior, growing in bunches on sturdy stems of up to 3 m in height,though it has been reported that the age of the plant needs to be 15 years or better to flower. In the wild it is a very variable plant, with some populations having large, jet-black terminal spines, some having red-brown spines, some with small spines, some large. Several atypical variants were also reported, some doubtless due to artificial growing in greenhouses.
Stem: Short.
Rosetes: Small, 25 - 40 cm high, usually caespitose, with numerous evenly spaced leaves spreading widely from the centre.
Leaves: Linear, rigid, radiately spreading, patulous, acuminate, 25-35 long, 2.5-3 cm, bluish-grey-glaucous, margins straight or undulate; larger marginal teeth 3-4 mm, dark brown, irregularly spaced 1-3 cm apart, with slender cusps mostly curved from small low bases. Terminal spine subulate, straight to sinuous, rounded below, flat above, 3-3.5 cm long, dark brown to grey, not decurrent.
Inflorescence: About 2 m tall, paniculate, slender, part-inflorescences shortly spreading, 10-14 in the upper 1/4 of the inflorescence. Often after the flowering there appear “ small bulbs”( already formed tiny plants) which fall to the ground, giving life to a new colony of Agaves. When this plant begins to flower the center leaves take on an attractive reddish hue from where the dark red inflorescence begins to emerge
Flowers: 50-56 mm; Ovary angular-fusiform, 25-30 mm, neck constricted, deeply grooved; Tepals pruinose green with purple tinge, tube 14 mm, lobes more or less equal, 13-16 mm, quickly wilting at anthesis. Filaments 35-40 mm long, sharply bent from regular insertion 7-8 mm above base of tube, spotted; anthers spotted, 20-21 mm long, slightly excentric.
Blooming season: Spring to summer.
Fruits (capsules): Oblong 4.5 long, 2 cm in diameter, dark brown, stipitate, with constricted prominent beak.
Seeds: 6-7,mm long, 4-5 mm, triangular, dull black. 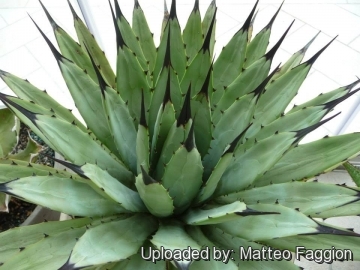 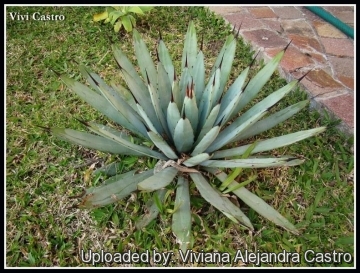 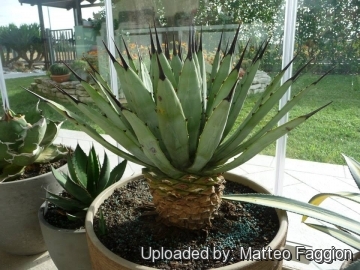 Agave macroacantha Photo by: Matteo Faggion
Send a photo of this plant.