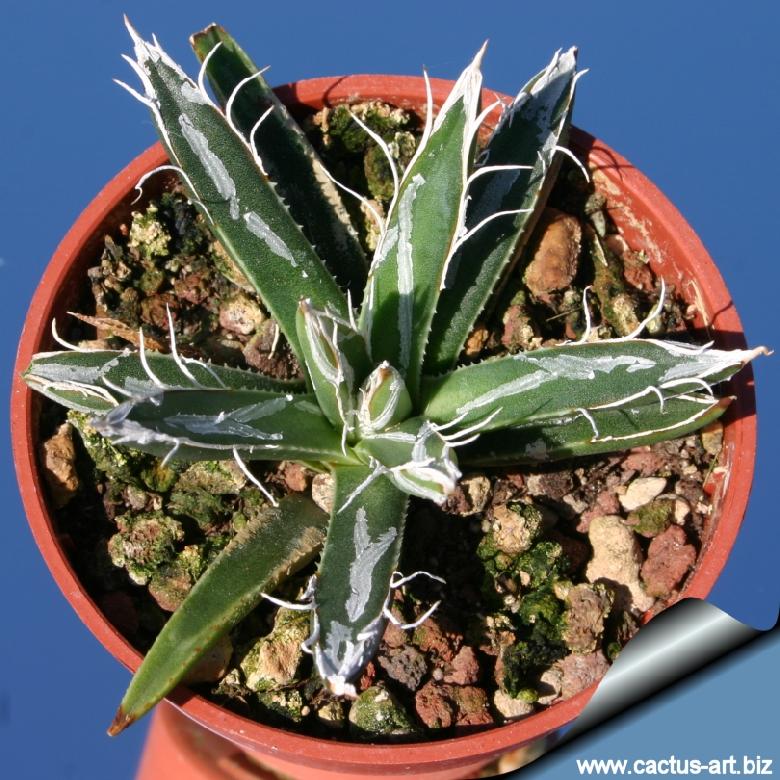 Agave parviflora ssp. parviflora (Smallflower Century Plant)
If you want a highly ornamental Agave with beautiful white markings this is the right one! It makes an incredibly ornamental potted plant and highly attractive to collectors. Plants offset freely in cultivation. It is decorated with thin white curly marginal fibres spreading in all directions and with very ornamental white bud imprints. These imprints vary in tone and become more noticeable with age.

Origin and Habitat: This species has a limited distribution in southern Arizona and northern Sonora, Mexico.

Habitat: Occurs on open rocky slopes of semi-desert grassland and oak woodland . It occurs at elevations from 1100 to 2400 meters.

Description: Agave parviflora is one of the smallest species of Agave composed of a small lovely, symmetrical rosette, 10 to 25 cm high, 15 to 20 cm broad and single or sparsely suckering. They live only 15 years or so, but generally produce offsets freely in cultivation.
Leaves: 6 to 20 cm long and 0.8 to 2 cm wide, thin, sharp, very stiff ,dark green with a waxy coating and with striking white markings, (bud printing) on on both surfaces and leaf margins. Leaf margins are smooth with conspicuous white , curling 'hairs' that peel off with minute teeth near the leaf base.
Flowers: Pale yellow or cream-colored along a green to reddish stem 1-2,5 m tall, in clusters of 1-4 on very short branches, small, only 14 to 27 mm long (the smallest of the genus). The inflorescence in upper half of stalk is spicate.
Blooming season: Spring. Flowering between the ages of 10-15 years.
Fruits: Small ovoid capsules 6-10 mm in diameter.
Seeds: Half-round and wedge-shaped. In size, seeds are 3 mm long on the thin edge, 2.5 mm long on the thick side.
Remarks: The species suggest a smaller version of A. toumeyana var. bella with less acuminate leaves and smaller flowers. 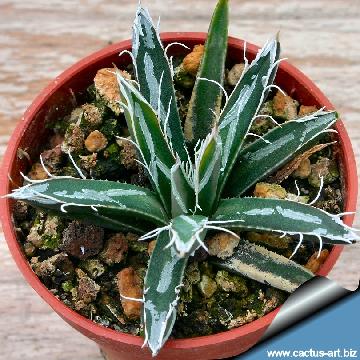 Agave parviflora Photo by: Cactus Art
Send a photo of this plant.

Cultivation and Propagation: Agave parviflora is a quitecold hardy form of the species. It is theoretically hardy to -5°C (or more) particularly when dry. It is a relative easy-to-grow species. Need a very well-drained, soil. It grows fairly fast in summer if provided with copious water but allows to dry thoroughly before watering again. During the winter months, one should only water enough to keep the leaves from shrivelling. They do well in full sun or a lightly shaded area. Plants cultivated outdoors are drought tolerant and takes blasting heat and full sun. It is a wonderful companion plant of Echinocereus and Escobaria cacti species.
Propagation: By suckers which often are found growing around the base of the plant, Remove the basal suckers (if available) in spring or summer and let the cuttings dry for a few days before inserting in compost or by seed.