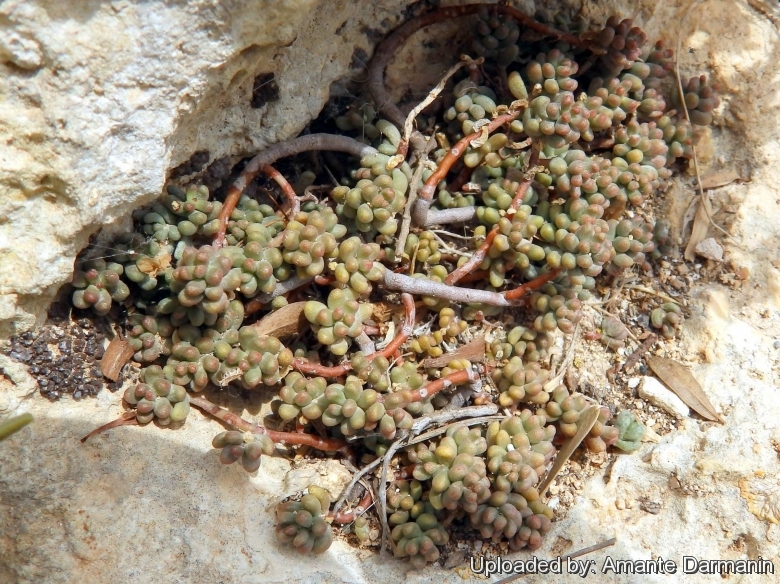 Sedum album subs. rupimelitense Photo by: Amante Darmanin
Vegetative habit at Dingli cliffs. Malta. Out of flower it resembles a typical small S. album but it rarely flowers and when it does each flower only has a single whorl of stamens [2].

Origin and Habitat: Malta. This species is found along the cliffs of Malta, more or less from il-Qaws to wied Moqbol.
Type locality: Misraħ Għar Daqquq (close to Ġebel Ciantar), Fawwara, Siġġiewi, on the edge of coastal cliffs of upper coralline limestone, 200 m.
Habitat and ecology: Sedum album subs. rupimelitense is unique in many ways, but it only grows up to 30 metres from the cliff edge, and lost its sexual reproduction.

Description: Sedum album subsp. rupimelitense (rupi-melitense) is one of the morphological or local forms of Sedum album from Malta (Maltese Islands). The subsp. rupimelitense “differ from previously known S. album plants in having very rarely formed inflorescences mostly without peduncular leaves and floral bracts, flowers in which (3–)5 stamens of one whorl, mostly of the antepetalous one, have dysfunctional and often abortive anthers and only the stamens of the other whorl having 5, dark maroon to blackish-brown, mostly indehiscent anthers at anthesis, pollen which is partly deformed and shrivelled, carpels without nectary scales, and fruits and seeds which remain undeveloped and sterile. The Maltese plants have apparently switched from generative to almost exclusively vegetative reproduction and are described as a new endemic subspecies” [1].

Subspecies, varieties, forms and cultivars of plants belonging to the Sedum album group 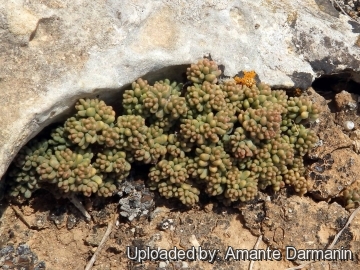 The gallery now contains thousands of pictures, however it is possible to do even more. We are, of course, seeking photos of species not yet shown in the gallery but not only that, we are also looking for better pictures than those already present. Read More...
Cite this page: "Sedum album subs. rupimelitense" Text available under a CC-BY-SA Creative Commons Attribution License. www.llifle.com 14 Nov. 2005. 27 Jun 2022. </Encyclopedia/SUCCULENTS/Family/Crassulaceae/34210/Sedum_album_subs._rupimelitense>